King Menes (Narmer) was the first king of Egypt and is credited with uniting Upper and Lower Egypt. He is also thought to be the founder of the First Dynasty which you will explore during your tours in Egypt. Not much is known about Menes’s (Narmer)’s early life. He may have been a local ruler in Upper Egypt before he became king. Around 3100 BCE, he began his reign by conquering Lower Egypt. He made Memphis his capital and ruled over a united Egypt for about 60 years, discover the old attractions of Narmer King through your tour in Memphis the old capital of Egypt. During his reign, King Menes (Narmer) built temples, organized trade expeditions, and expanded the Egyptian army. He also established the first postal system in Egypt. In addition, he is believed to have introduced the idea of using pictograms (simple pictures) to write hieroglyphics (a type of ancient Egyptian writing). King Menes (Narmer) was a powerful and influential ruler. His accomplishments helped set the stage for the prosperity of Ancient Egypt. Plan a tour to Memphis to your Egypt travel packages to be close to the interesting stories and achievements of King Narmer.

The History of King Menes, Narmer

Menes is traditionally credited with uniting Upper and Lower Egypt under one crown, thus, becoming the first pharaoh of a unified ancient Egypt. He was also instrumental in starting a new era known as the First Dynasty. Visit the First Dynasty attractions during the Egypt day tours to listen to and watch the history of this era.

Menes is believed to have been the founder of Memphis, which quickly became an important center for trade and politics. Under Menes’ rule, Memphis rapidly grew into a prosperous city.

Although Menes’ reign was relatively short-lived, it was very significant in Egyptian history. He left a lasting legacy and his accomplishments helped lay the foundation for the great civilization of ancient Egypt. Although it is a short period, Narmer left interesting archaeological landmarks that you will discover during Cairo day tours.

The Reason for Naming King Menes for Narmer

King Menes, also known as Narmer, was the first pharaoh of Egypt. He unified Egypt and established the First Dynasty. Menes is thought to have reigned for about 62 years, around 3100 BCE to 3038 BCE. He was succeeded by his son, Horus Aha.

Very little is known about Menes’ early life. He was probably born in Upper Egypt, in a town called Nekhen (modern Hierakonpolis). His father was probably the local ruler, Scorpion II. Menes’ mother is not known for certain, but she may have been a woman named Neithhotep.

According to Egyptian tradition, Menes led his army across the Sinai peninsula and defeated the forces of king scorpion II at the site known as “The Place of Cattle Crossing”. This victory consolidated his power and allowed him to unify Egypt. It will be more interesting if you visit the attractions that King Menes left during your Egypt luxury tours whether in Cairo or Sinai, and it will be a good chance to explore desert safari tours in Egypt as well as explore Sharm El Sheikh excursions if your time permits.

Menes may have also been responsible for moving the Egyptian capital from Thinis to Memphis. He built a new palace in Memphis which you can visit with your family through our family tours in Egypt and save new memories about Memphis culture. 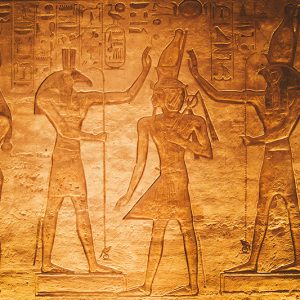 King Menes, also known as Narmer, is thought to have been the first king of a unified Egypt. He is credited with leading Egypt’s conquest of the Nile Delta and is said to have merged Upper and Lower Egypt into one kingdom. Menes is thought to have reigned for around three decades in the early 31st century BCE. Join our luxury pyramids and Memphis tour package as it will be a different experience to listen to the history of Narmer’s reign yourself.

While not much is known about Menes’ reign specifically, it was likely a time of great change and upheaval for Egypt. The country was probably expanding its territory and influence, and consolidating its power within the region. This would have been a tumultuous time, full of conflict and bloodshed. Nevertheless, Menes is remembered as a great leader who helped shape Egypt into the powerful empire it would become.

Tomb and artifacts of Narmer’s Era 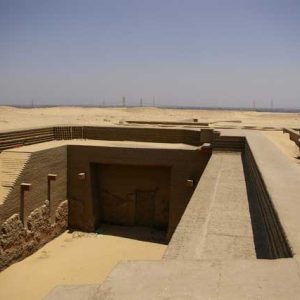 The tomb of King Menes (Narmer) was discovered in 1898 by Flinders Petrie. It is located in Abydos which became an important attraction to visit after Luxor day tours. The tomb contains a wealth of artifacts, including a sandstone sarcophagus, carved with the king’s name and image. The temple’s location is situated between Luxor and Aswan excursions, so it will be a good idea to sail to Abydos temple on Egypt Nile cruises.

The sandstone sarcophagus is the most well-known artifact from King Menes’s (Narmer’s) tomb. It is made from a single piece of stone and is decorated with the king’s name and image. The sarcophagus was probably used to hold the king’s body after his death.

Other artifacts from the tomb include a wooden bed, a copper bowl, and a stone vase. These objects would have been used by the king during his lifetime. They provide insight into the daily life of an ancient Egyptian king. The tour guide of the Vantage travel agency will be with you to tell you all the details of each artifact.

Popular culture is often thought of as a source of entertainment or amusement. However, it can also be a powerful tool for social change. King Menes was an early Egyptian ruler who is credited with the unification of the country. He did this by creating a centralized government and by introducing new laws and customs. While Menes is not as well-known as some other ancient rulers, he made a significant impact on his time period and helped to shape the future of Egypt.