After a long period of excavating and prospecting for the monuments that our ancient Egyptian lift, we reach the treasure. A large campaign led by Professor Khaled Anani, Minister of Tourism and Antiquities, discovered 5 new tombs in Saqqara dating back to more than 4400 years. New 5 tombs in Saqqara will be added to your Egypt tours program.

The story of the discovery of 5 Saqqara tombs

The tombs found by researchers and excavators date back to the era of the Old Kingdom, which is more than 4400 years. It is the tombs of the major countries that should be included in your discoveries in Egypt tour packages. The first tomb was that of a high-ranking statesman, and another was found of a woman whom Egyptologists suspect to be the wife of a great statesman named “Yarit”.

There are three other tombs are founded during the excavation of Saqqara tombs. One of Saqqara new tombs is for the priest “Benfar Hafai”, who has attained many positions, the most important of which is the purifier of the house and the only Samir. The fourth tomb belongs to a woman priest named “Betty”, who is the priestess of the goddess Hathor. And last but not least, the fifth discovered tomb of the royal palace supervisor, “Hannu”, holds the title of mayor and bears the seals of Lower Egypt. After this short brief, can you imagine Egypt day tours without including these 5 new tombs in Saqqara in your program of Cairo day tours? 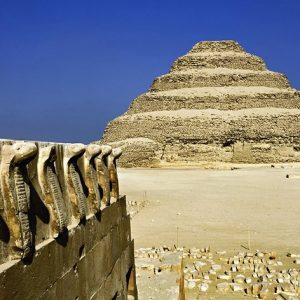 If you are in Egypt, especially Cairo, you must take a day trip to Giza. The monuments in Giza are unparalleled to any other antiques in the world. Sakkara is a destination that must be visited, as it has a unique pyramid, tombs, and small temples.

The step pyramid, or the pyramid of Djoser. Imhotep is the one who designed this distinguished tomb during the reign of King Djoser. Imhotep was the source of inspiration for the pharaohs in the idea of ​​building the pyramids. The step pyramid in Saqqara is the most important and largest funerary monument of the thirteenth dynasty. You can visit the first discovered pyramid in Egypt by joining us on the Sakkara day tour.

The pyramid of Djoser, or step pyramid, was built with a height of 60 meters and a base of 109 x 121 meters. It is certainly smaller than the three pyramids of Khufu, Khafre, and Menkaure. But it was the main reason for building them. Yes, because the Saqqara pyramid is the first pyramid built to be the tomb of a ruler. So that it is a very important source of inspiration for the Pharaohs.

Your tour in Giza will not be limited to the Saqqara pyramid (Step Pyramid) only, you have many attractions to visit in Giza including Giza Pyramids, and Sphinx, and you can enjoy a camel ride tour.

Saqqara succeeded in inciting controversy. Until worldwide networks and platforms took advantage of the opportunity to produce a documentary film revealing the mysteries of the Saqqara cemetery. Where 4400-year-old pristine graves in excellent shape were uncovered. The surprise and mysteries are on their way since the tombs inspired researchers to excavate, expecting to locate the mummies of the priests and their families to disclose fresh secrets and alternative ways of life in a previous age.

The film was released on Netflix in 2020, and you may view it to learn about the splendor of the Saqqara region to incorporate into your Egypt luxury tours. Learn more about the sights in Giza that are worth seeing.